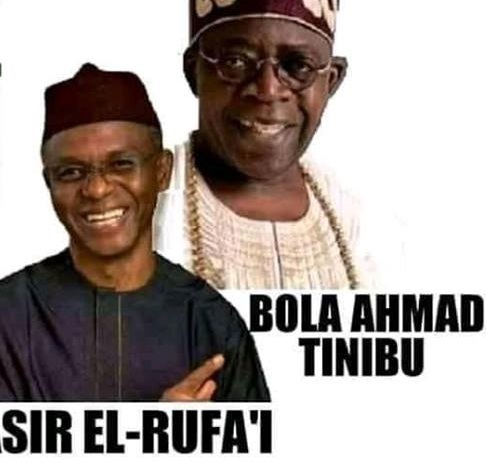 Idowu Akinlotan  wrote: – “In November 2015, in the giddy early days of his governorship, Mallam el-Rufai invited Asiwaju Tinubu to commission Kaduna’s new cab scheme. It is hard to explain why the acerbic views he now publishes did not dissuade him from extending an invitation to a man he described at the time as “esteemed”. The Kaduna governor’s gloomy attacks underscore why everyone, especially leaders, must be careful with whom they associate. Mallam el-Rufai is book brilliant, eloquent and, in direct contrast to his size, somewhat charismatic and persuasive. But scratch him a little, and what comes to view can be quite disconcerting. A little scratch reveals a self-willed, pompous, heady, fanatical and divisive person and politician. He has done quite some remarkable administrative rejigging in Kaduna State, but nothing he has done matches the revolutionary undertakings and progress Lagos has witnessed since 1999 pound for pound– at least nothing matching the size of his egotism and extravagant displays. He has ostracised Southern Kaduna and exposed the people of that region to needless bloodletting, promoted ethnic exceptionalism while disguising his methods as progressive and iconoclastic, and has denounced, hated, and ridiculed everyone nature has undeservedly brought his way to help him along in life.

What is more, Mallam el-Rufai disdains press freedom and has baited them. It is no wonder that a man so completely destitute of character once badmouthed even President Buhari before whom he now genuflects, and has repeatedly tried to tear to shreds the image of former vice president Atiku, the man who brought him into public limelight and protected him against the hyenas of the National Assembly. By now, even Alhaji Atiku must have realised that it is not everyone that deserves to be mentored. There are some potential mentees a leader must scrupulously avoid, as the history of World War II shows in the case of Germany and Adolf Hitler.

Brilliance is one thing; character is another. They do not always commingle, nor are they often coterminous. Mallam el-Rufai typifies that corrosive paradox in a Goebbelsian fashion. Asiwaju Tinubu is believed to harbour presidential ambitions for 2023. He is entitled to his ambition, and the electorate will have to determine whether to accept or reject him. It is also suggested that Mallam el-Rufai might wish to take a shot at the presidency in the next election cycle. Good for him, despite instigating the president against those he said were beginning to manifest excessive ambition so early after the last elections. Perhaps in the months ahead, those who wish to have a shot at the topmost office in the land will ignore every sense of moderation and decency and attempt to tear one another to pieces. Here, Mallam el-Rufai, never known for any kind of moderation, will exceed himself with his customary cynicism and egotism.

The public must be careful not to allow the fanatical and illiberal narratives peddled by Mallam el-Rufai and his ilk colour their appreciation of Nigerian politics. Nigeria has been repeatedly undone by the clumsy and distorted manner the electorate’s attention is focused on the image of a politician painted and distorted by propagandists and interest groups. History reveals numerous leaders whose persons were regarded as openly disagreeable, but whose capacity for mind-blowing achievements became legendary. If voters want orators, they can have them. But they must know that they can’t have their cake and eat it. If they want megalomaniacs, good for them. But if they want those who have a deep understanding of Nigeria, its place at the moment, and the future it must aspire to, then they must decide whether to be hodwinked by glib and pompous people without character.

There are not many politicians with a firm grasp of the existential quandary Nigeria is entrapped in, issues that have paralysed the country and made her vulnerable. Those who do, however, are often in danger of being shoved aside and destroyed by a combination of propaganda and venomous ethnic and religious politics. It is doubtful whether the country is not even engaged in endgame already. If disaster is to be averted, voters must denounce and repudiate the politics of tribe and religion. The next presidential poll must never be about where a person comes from, or whether his face is liked or not, or whether he is rich or poor. For if he is rich, there is a tendency to fear and envy his wealth; and if he is poor, there is a tendency to suspect his bona fides. What should matter is whether the people can instinctively gauge the candidate’s competence, open-mindedness, joie de vivre, and democratic credentials. Mallam el-Rufai is for instance rumoured to be interested in 2023. It would be disheartening to even give a tyrant who has set out to destroy his opponents within and outside the party a hearing.

The next election cycle is going to be a titanic struggle. It is estimated that President Buhari might become a lame duck president before the third year of his second term. Given the fever that has lathered the APC and the contemptuous and disdainful politics being played by Mallam el-Rufai and his cohorts, 2023 may have already begun. The APC is in for a rough time. It was never really a party, and if it had not faced a candidate weakened by ethical challenges, they would have come a cropper in the 2019 presidential poll. It is now almost certain that a fierce fight for the soul of the party will soon ensue. The initial euphoria that followed their recent poll victory has become a mirage. Party chairman Adams Oshiomhole will intensify his sanitising efforts, face up to the turmoil in the party and clip the wings of nascent oligarchs like Mallam el-Rufai who wish to create feudal enclaves for themselves and their cronies.

In the buildup to the 2019 National Assembly poll, Mr Oshiomhole seemed to detest the overbearing politics of the Kaduna governor, and would have favoured more temperate politicians like Senator Shehu Sani, but he found it impossible to pull off the moderation and reconciliation he desired. Mallam el-Rufai knows his party chairman’s preferences, and, from his surly remarks at the Bridge Club, is obviously in the process of coaxing a rebellious alliance out of the many aggrieved or ambitious Southwest politicians roaming the land. The new coalition thinks the time is right, and with pejorative labels and terms carelessly hurled at opponents, they expect victory.

Also Speaking exclusively with Daily Mail, El-Rufai through one of his aides who refused to be named as he was not the official spokesman of the Governor said, “Nigerians know who a drug baron is. Nigerians know who was arrested and convicted of drug peddling in the US some decades ago.
“The Executive Governor of Kaduna tate cannot be a running mate to such a person.”
Tinubu had allegedly tipped the Governor of Kaduna State as his running mate for the Presidency in 2023 but the Governor has not only turned such a move down but derided the former Lagos State Governor. He also went ahead to urge Lagosians to demystify Tinubu laying strategies on how to unmake a man called Lion of Bourdillon so as to stop him from being the godfather of Lagos politics.
El-Rufai is a very close friend of outgoing Governor of Lagos State, Akinwunmi Ambode. Tinubu personally stopped Ambode from winning his second term in favour of his anointed candidate Babajide Sanwo’Olu.
“Here in Lagos, you have over six million registered voters, only about a million voted (in 2019 general elections); five million did not vote. If I want to run for governor of Lagos, I will start now.
“I will commission a study to know why those five million registered voters did not vote; where do they go on election day?
“Then I will start visiting them for the next four years. I will try and get just two million of them to come and vote for me; I will defeat any godfather.
“The key is to go to the people. The card reader and the biometric register have given us the tools to connect directly with the people,” El-Rufai had said in Ikoyi, Lagos, at an event organised by the Bridge Club tagged, “An evening with His Excellency Mallam Nasir El-Rufai, Governor of Kaduna State.”
It was a direct attack on Tinubu who rather than responding allegedly directed his surrogates to respond.
Joe Igbokwe, Publicity Secretary of the APC in Lagos, said El-Rufai wants to be globally recognised like BAT (Bola Ahmed Tinubu) in response the attack.
“Yes, he’s recognised – a man like him must be recognised in one way or the other. Can’t a man who pushed drug and was arrested in the US have his name written in the black book in the US? That’s recognition too,” El-Rufai said.
Tinubu is regarded as one of the richest men in the world, stupendously rich after serving as Governor of Lagos between 1999 and 2007. He owns the Nation’s Newspapers, TV Continental among others, with critics saying he uses the news platform to launder his image.
“He uses his media companies to show he’s clean, he’s not corrupt.
“Who was he before being a governor? Where did he acquire his wealth? Who has bought Lagos State? Whose company collects revenue for Lagos State and has brought his protege to head one of the most important agencies of federal government – Federal Inland Revenue Service, FIRS – to collect revenue for FG?
“Have you heard the latest? FIRS is now embroiled in corruption running to tens of billions. Who do you think is collecting the money?”
He questioned why would a respected Governor of Kaduna accepts to be such a person’s running mate? “He’s not fit being his running mate. He would not even allow Tinubu to be his running mate, no, it’s not possible.
“The Ex-Governor of Lagos State belongs to the dark side of history and cannot be accorded the same respect like the former minister of the Federal Capital Territory.”
Tinubu has not helped El-Rufai he said adding, “We’re all members of a political party. The same role he plays even a bad one in APC is the same role but excellent one is the Governor playing. How many votes did his Action Congress of Nigeria get in 2015 and how many in 2019? Don’t you see his strength and control of Lagos is waning?”
Outside Lagos, in the South West, Tinubu has not had it his own. “He caused trouble in Oyo State, Ogun, Ekiti and Ondo states. Didn’t we lose Oyo completely and lose Ondo in the presidential elections?
What influence are you talking about? Does he even have a role in APC apart from from imposing a fake name on himself?
“For those he’s recruiting to speak for him, time will tell. They will also know when they have been used and how not important their landlord is. Thank God he’s called Lion of Bourdillon and not Lagos or South West or Nigeria.”
Daily Mail understands Tinubu had pencilled El-Rufai, a close pupil of President Muhammadu Buhari as his running mate as he prepares for 2023 but the Governor sees the former as unfit.
Unconfirmed reports say El-Rufai wants to take a shot at the Presidency himself and feels 2023 would be the right time after Buhari.

THE INJUSTICE OF REVENUE ALLOCATION IN NIGERIA BY Annkio Briggs 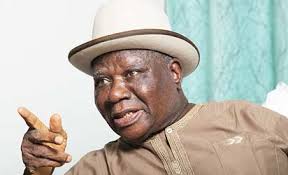 Husband narrates how wife was beheaded in Kano as Gov. announced arrest of prime suspect