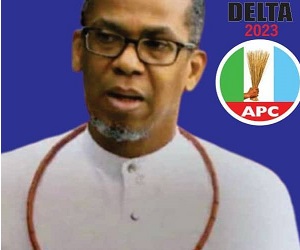 I wrote the article, “PDP’s 24 years in Delta: Not even one standard flyover. In that article, I identified the failures and need to vote out the PDP in Delta come 2023. I made clear that democracy requires a people to vote out of their government any political party that is not serving their needs. I noted therefore that because the PDP had in 24 years failed to demonstrate an understanding of the issues of our development, it should be thrown out of our government in 2023. Still in the article, I made a passionate appeal to patrioticDeltans with a godly spirit to come to the rescue. I equally called on Deltans to wake up from their political docility and take responsibility for a better governed Delta State and country by voting for credible and capable men in 2023, if they wanted the circle of poverty in the state broken.

Few days after, I got the news of the declaration of interest of the Okpe-Urhobo son, Chief Ede Omueya Dafinone to run for Senate, Delta Central Senatorial District under all Progressive Congress, APC. I was very happy but at once my joy disappeared as my mind was invaded by a few perturbing questions. One, Is Ede credible and intellectually sound, morally groomed and socially concerned about the issues of our common developmentto be ableto give Urhobo a resounding voice at the Senate, given the new commitment to reposition the tribe and move Delta from the era of political mediocre? Two, is he patriotic and independent-minded to articulate and process the views and wishes of the people into marketable bills and motions? Three, does he have a history of service to Urhobo or of identifying with her struggles?I read throughEde’s personal profile and declaration of interest speech and I asked, who among the other aspirants is better than Ede Dafinone? Ede is a mixture of academic, professionalism and business. He is a mixture of international and local identity. I have no surprise. Like father like son. Ede is the second son of the Okpe pathfinder, late Chief David Dafinone, a former Senator of the Federal Republic of Nigeria, a prominent Chartered Accountant, a renowned Okpe Chief and a very successful businessman with great material blessings. The Accountants call them, assets.

The conversation around Ede is an interesting one. It’s beyond a matter of fatherand son. Ede is actually the symbol of a family heritage. It’s a world known family of six Chartered Accountants – a father and fiveacademically dedicated children. It’s a family that has entered into the Guinness Book of Records for producing five Chartered Accountants and promoting public value in the field of accounting. I celebrate Ede’s academic profundity and reassuring words. They reflect hope, passion and love, civilization and expertise, humility and receptiveness, insight and mind powerto make Urhobo proud again.Hear him, “Compatriots, in 2015, when we needed a strong voice at the national level to reposition the Urhobo nation,after years of declining influence and standing in the politics of our country, we sent Senator OvieOmo-Agege…in just seven years in the Senate, Omo-Agege pursued his vision to restoreUrhobo greatness…he offered us effective and quality representation…and raised the bar on legislative representation to a new level. These accomplishments which demonstrated that doing good work matters, have laid a solid foundation for our future. Now, we must build on and improve on that foundation…” Ede added, “If elected, I will campaign tirelessly to promote Nigerian made goods and work to enact laws to create an enabling environment for the manufacturing sector to thrive”. He has assured of his commitment to work with his colleagues at the Senate to promoting transparency and accountability in our government. Ede’s vision is clear. Hewants to build upon and even surpass the Omo-Agege’s achievements in Urhobo.I salute his concern and thoughtfulness.

Basically, Ede attraction is not in his material opulence, beautiful body frame, intelligent and flowery speeches, international exposure that have awakened hope in many quarters but much more about his humble romance with community women and youths and untiring services to local and foreign organizations. While the other aspirants (tested and failed aspirants for that matter) gamble with the emotions and sentiments of the people, repeatedly taking advantage of theirnaivety and political timidity, Ede is frontloading proof of his concern and good works in the life of the people inscholarship awards, micro-credit loans to women and vocational skills development to youths across Delta. We have had in the past representatives who do not feel about the burden of the people and did not raise a finger to help their community women but would only need them at the time of election. Seriously, Ede is a game changer that Urhobo cannot ignore to run after and dance around politicians whose major concern in politics is only about who is loyal and who is not loyal. 2023 defines a time to electgood men – men with vision, conscience, purpose and commitment to their electioneering promises. Being in the Senate is not all about “nay’s and I’s” and a collection of monthly salaries and allowances. It entails a confraternity with the people, identifying their needs and making plans to addressing them. In all this, Ede has shown understanding and commitment. He says, “In offering myself to represent our people, I am mindful of their expectations and needs, which I understand very well having served in various committees of the Urhobo Progress Union, UPU. Today, I’m even more committed to serving our people and contributing to the progress ofUrhobo land”, Talking about issues bedevilling the country, Ede hits the nail on the head, “At the heart of the challenges we face as a district and a country is the urgent need to create jobs for our people, especially women and youths.”Visibly, Ede belongs to the group that wants to build a country with a new political order.Before I forget, Ede is not a street boy aspirant. He has a Bachelor’s Degree BA (Hons) in Economics, University of Manchester and a Master’s Degree MA still in Economics but from the University of Exeter. Shortly after, Ede begins the journey for professionalism. Indeed, it was a fruitful journey. Today, he is a Fellow of the Institute of Chartered Accountants of England and Wales, ICAEW, a Fellow of the Institute of Chartered Accountants of Nigeria, ICAN.But that is on the academic side. Ede has served Urhobo in the various committees of the UPU. He is the Chairman, SapeleOkpe Community Land Trust Association; Trustee of the Okpe Union Worldwide, Treasurer and Trustee of the Okpe Leaders of Thought; A Trustee Guild of Fine Artists. At the business angle, Ede is a champion. He is Chairman, Manufacturers Association of Nigeria Export Promotion Group, (MANEG), Chairman, Nexportrade Houses Limited (NHL), Chairman, Sapele Integrated Industries Limited (SIIL), Chairman, Nigerian Conservation Foundation (NCF). Beyond the local scene, Ede equally has a name that in 2021, he was appointed member of board, NEXIM Bank. Currently, he is the Chairman, Institute of Chartered Accountants of England and Wales, ICAEW; Member Advisory Board for Africa and in 2019, he was appointed a member of Council, Institute of Chartered Accountant of England and wales, ICAEW. Now, who among the other aspirants that is more credible, intellectually prepared or has served Urhobo more than Ede? Does any of them have Ede’s pedigree? Since 1989, Ede has assisted in building (and still building) the family owned accounting firm. Crowe Dafinone, a Chartered Accountants firm based in Lagos where he is currently the Deputy Managing Partner.

The Orodje of Okpe and Olorogun Otega Emerhor have rightly commended Ede, saying he has a rich CV to represent Urhobo. Their commendation is in order but just to add that the support Ede needs at this time is beyond newspaper praises. The Orodje is the traditional head of the Okpe people, comprising Sapele and Okpe LGAs. The Orodje at this time should make bolder statements specifically calling for support of the people for Ede, his son. For me, it’s a payback time. The Okpe Kingdom, including her throne has greatly benefittednot only from the family but also Ede, who has laid down himself to serve the people. As mentioned earlier, Ede is Chairman and a Trustee to several Okpe unions and associations.As it is, Ede’s hands are already full with God’s material blessings and he may not be seeking to be in the Senate with the usual primitive orientation to acquire and acquire to maintain a good life when the people he represents in government are suffocated economically and socially. Having seen a wide range of difference between Ede and other aspirants,who do we now entrust with our collective aspiration? A silent voice says Ede.No doubt, Ede represents a polished personality, a civilization, integrity and pride that Urhobo cannot ignore to celebrate those who come to us empty handed. 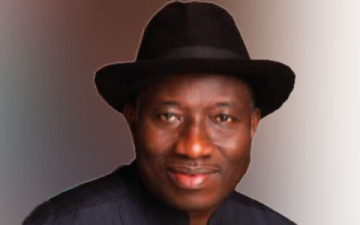 Jonathan may declare in October