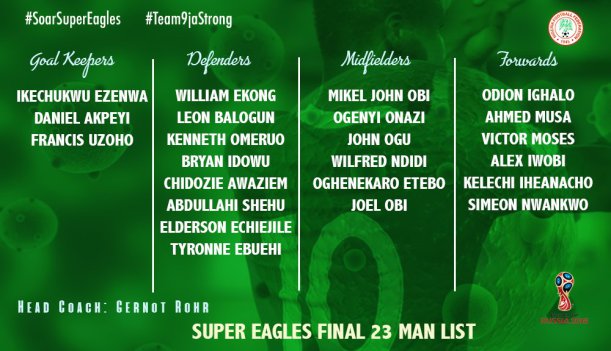 The Super Eagles coach, Gernot Rohr, has finally named his 23-man squad for the 2018 World Cup in Russia.

Having already trimmed down the provisional squad to 25 before the England friendly, Rohr was left with the decision of dropping two players from the roster.

The ‘unlucky’ duo dropped on Sunday are Ola Aina and Mikel Agu.

It is understood that both players will still travel to Russia as they are now on the alternate list.

John Mikel Obi is top on the list which has three goalkeepers, eight defenders, six midfielders as well as six forwards.

The Super Eagles will be making their sixth appearance at the World Cup in Russia and would be campaigning in Group D against the trio of Croatia, Iceland and Argentina